With their vibrant colours, inspired designs and insights into an often-vanished world, classic travel posters are gaining in popularity among collectors

T here’s something glorious about traditional travel posters – the colours, the lines of classic ships and planes, the overwhelming idea that the world is a big, beautiful place that can’t wait to hold you to its bountiful bosom. For all those reasons, over the past two or three decades, the genre has come increasingly to the attention of both collectors and dealers.

Three of the world’s leading experts are Kirill Kalinin, a Russian who has adopted the UK as his home and has a showroom (as well as an online gallery) called AntikBar in London’s Kings Road, Chelsea; Patrick Bogue, of Onslow Auctions in Dorset, England, who held his first auction of travel posters in 1984; and the charismatic Nicholas ‘Nicho’ Lowry, the third-generation chairman of Swann Galleries in Lower Manhattan.

What all three hold in common is a love of posters, being collectors as well as dealers.

Kalinin says that his passion for the genre was sparked in New York in 1993: ‘I saw a poster by [Latvian constructivist artist] Gustav Klutsis for Soviet art at the Guggenheim.’ From this, Kalinin went on to specialise in the theme of vintage travel.

Lowry’s interest also came about by chance: 'Back in 1998 I was called to an art museum in Mississippi to see a collection of posters a librarian had brought back from Europe. I fell in love with these strong, visually exciting images and started collecting. I thought, “You know what? I’m in a position where I can make an auction of these posters.”’ 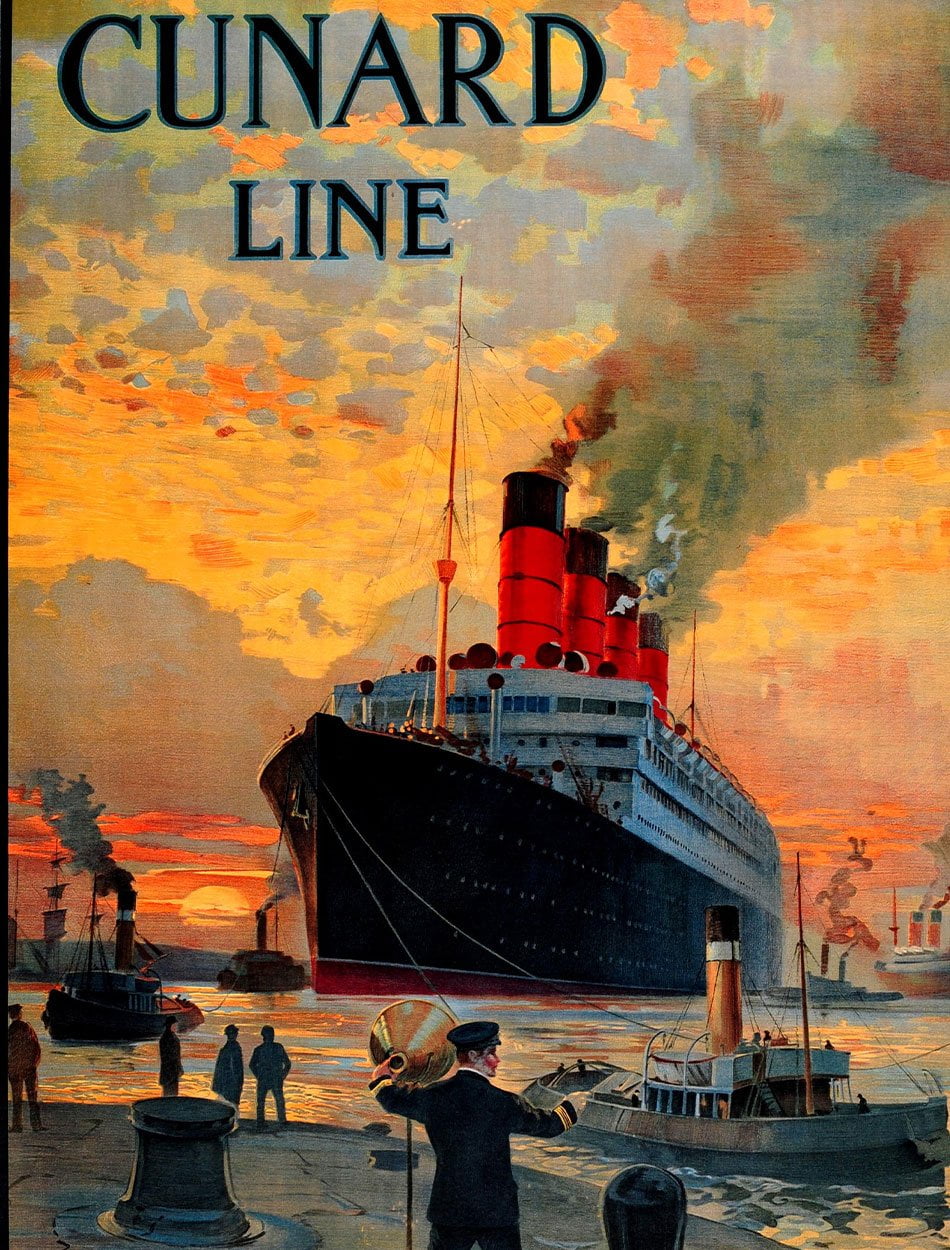 Kalinin says that he is working at the moment on the sale of a very large collection for a man whose father was a travel agent from the early 1920s to the late 1940s. ‘This was the golden age of travel all over the world,’ he says, 'a very strong period graphically.

'And it was a glamorous time; travelling was very expensive, especially by plane, but also by ship. So the posters had to appeal to a certain clientele, they had to look luxurious and inviting. They had to be very glamorous.’

White Star and Cunard are premium brands in design terms 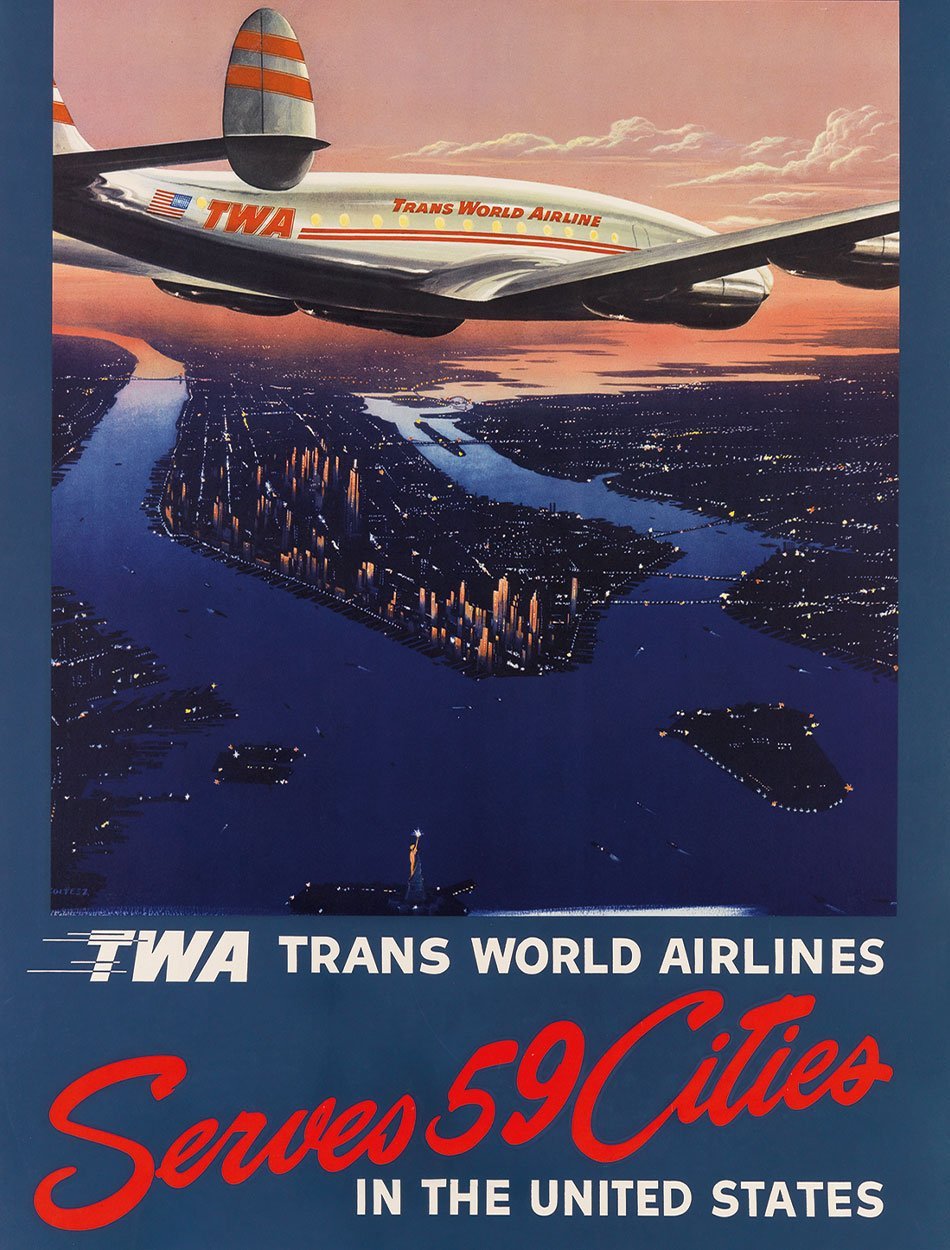 Bogue takes up the story of how travel posters came into their own in the 1920s and 1930s, led in the UK by train companies and, especially, London Underground. ‘The man behind this was Frank Pick. Although not an artist himself, he was brought in to sort out the advertising department. They needed to find innovative artists familiar with the latest technology, and Pick was a genius at finding them.

‘Probably the best example was Edward McKnight Kauffer, an American who had come to London in 1912. Pick gave him a chance. He became London Underground’s most successful designer, working with the firm until the 1930s. The challenge was to get the message out quickly and with immediacy, that as well as using London Underground for commuting to work, one could use it to get out and visit the countryside, so you’d have these strong and forceful rural images, such as trees or rivers, or the ponds in Richmond Park, with strong colours and simple lines. The idea was that if you were standing on a platform or sitting on a train and you glanced at one of these posters, you got the message quickly and simply.’

Says Lowry: ‘For me, the most valuable posters are not always the ones to which I am drawn. For instance, the cover of the catalogue for the auction we held in October 2017 features a beautiful TWA poster from 1952 that is just unbelievable. It makes you say, “Wow!” It’s got Manhattan, it’s got a very famous airplane that was a TWA workhorse, the Lockheed Constellation, the colours are amazing, the skies are out of this world and with Lower Manhattan, you’ve got the Empire State Building, you’ve got all the bridges... and the guide price for this is $3,000-$4,000. Significant, yes, but in the scheme of things very affordable.’

Collectors should look for vertical markets, adds Kalinin, such as modes of transport. ‘For ships, companies are important. White Star and Cunard are premium brands in terms of design (they could afford the best designers) and in terms of destination. America, of course, but Australia is also pretty popular.

'A crossover between destination, mode of travel (such as steam trains) and a famous railway line would boost the value because it would appeal across various markets that people collect,' he says. 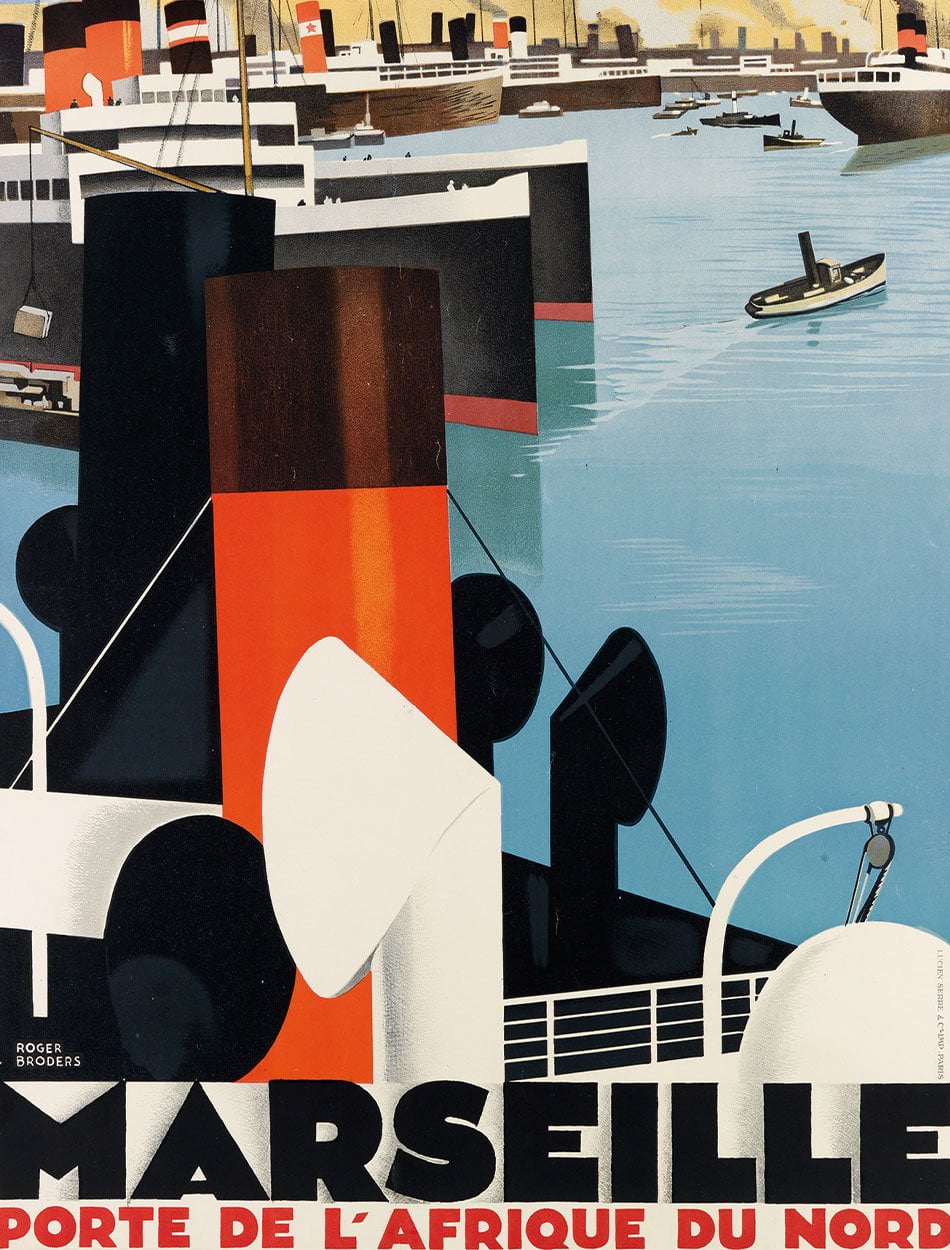 ‘The other great rarity is one from 1928 by the great French poster artist, Cassandre.’

Lowry adds: ‘Ocean liner posters are a sub-section of the travel poster market, as are railways and trains, golf, skiing and so on.’ Another factor is the name of the railway company. Prior to the Second World War, there were lots of different railway companies such as Great Western Railway (GWR) and London and North Eastern Railway (LNER), and these are factors that affect collectability, say all three experts.

Is there such as thing as the Gutenberg Bible, the Holy Grail of vintage travel posters? For Patrick Bogue, it would be The Night Scotsman (not to be confused with another work with the same name by Robert Bartlett) by Alexandre Alexeieff, which has sold in the UK for in excess of £30,000. ‘We sold one many years ago for £11,000, which was a UK record at time,’ says Bogue, not a little wistfully.

‘The other great rarity among travel posters would be one from 1928 by the great French poster artist, Cassandre,’ adds Bogue. Commissioned by the London Midland Service (LMS), it was called The Best Way.

‘It shows a locomotive’s wheels in a very modernist style,’ says Bogue. ‘It seems that it was never actually displayed on platforms so there was a very limited print run, just proofs, so scarcity means it commands a huge price. This would probably fetch a greater price than The Night Scotsman, even. It has sold a couple of times in New York for around $60,000.’

‘We’ve certainly never been offered one,’ adds Bogue with a tinge of sadness. Says Lowry: ‘With regard to Cassandre’s The Best Way, I can’t believe it never went into the production. I imagine the artist was thinking to himself, “What is wrong with you? This is my best work, you morons!”’ 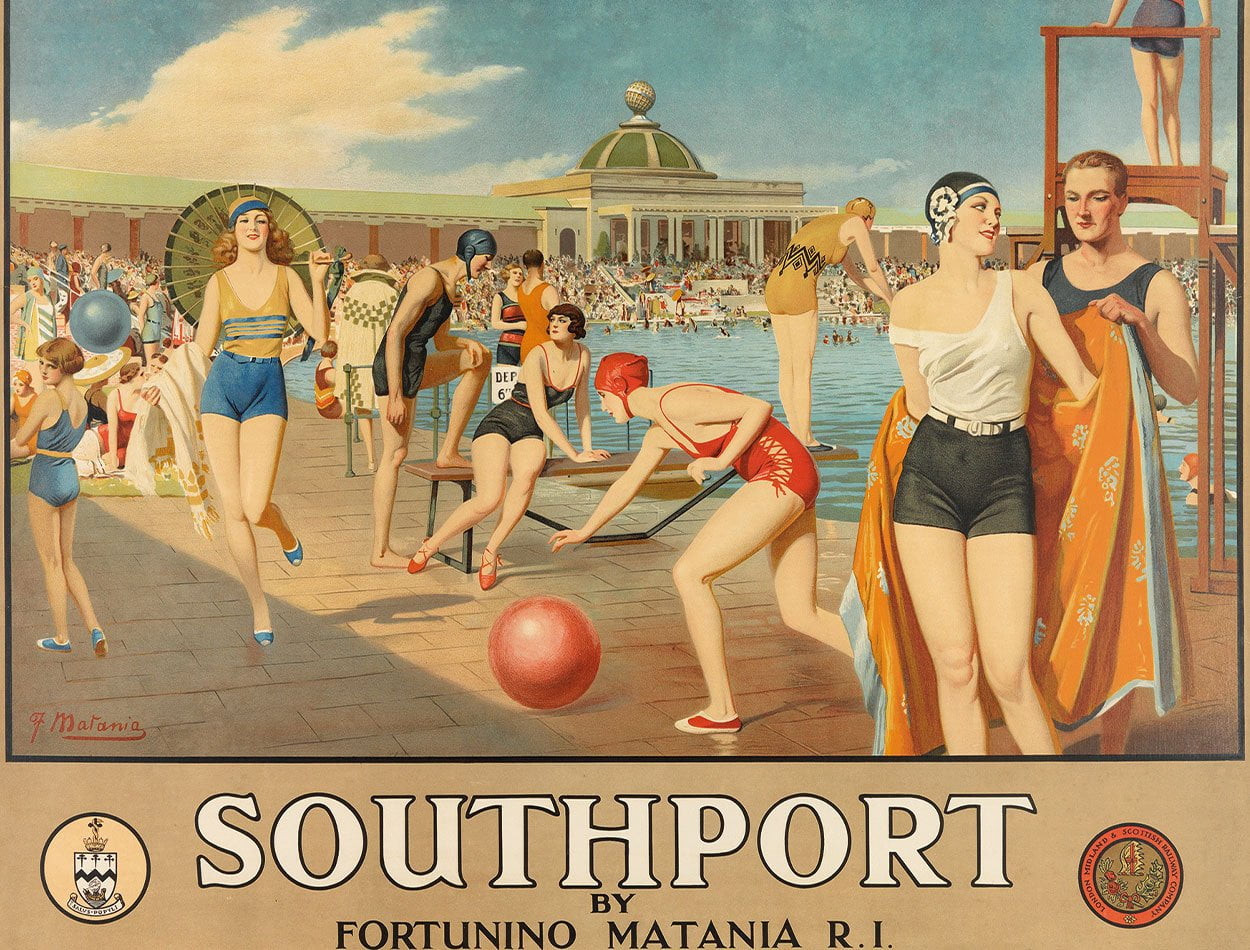 Themes, destinations and specific modes of transport or companies can provide coherent themes for a collection.

Names are important, such as McKnight Kauffer, but collectors are also attracted to powerful imagery and places they know or to which they have links. Minor tears can generally be restored, but it is very hard to restore a poster that has faded, so they must be kept out of direct sunlight.

The 1950s are becoming increasingly popular. Collectors should look out for work by artists such as John Burningham and Tom Eckersley. Some of the most sought-after posters in the UK are those by a group of artists working for the London and North Eastern Railway (LNER) in the 1920s-1940s.

At the height of their powers, Tom Purvis, Frank Newbould, Austin Cooper, Frank H Mason and Fred Taylor were known as the Big Five.

This article was originally published in Halcyon magazine in 2017